In this chapter, we will cover the following topics:

Mathematical optimization is a wide area of applied mathematics. It consists of finding the best solution to a given problem. Many real-world problems can be expressed in an optimization framework. What is the shortest path on the road from point A to point B? What is the best strategy to solve a puzzle? What is the most energy-efficient shape of a car (automotive aerodynamics)? Mathematical optimization is relevant in many domains including engineering, economics, finance, operations research, image processing, data analysis, and others.

Mathematically, an optimization problem consists of finding the maximum or minimum value of a function. We sometimes use the terms continuous optimization or discrete optimization, according to whether the function variable is real-valued or discrete.

In this introduction, we give a few important definitions and key concepts related to mathematical optimization.

We will study methods to find a root or an extremum of a real-valued function \(f\) called the objective function. An extremum is either a maximum or a minimum of a function. It can accept one or several variables, it can be continuous or not, and so on. The more assumptions we have about the function, the easier it can be optimized.

A maximum of \(f\) is a minimum of \(-f\), so any minimization algorithm can be used to maximize a function by considering the opposite of that function. Therefore, from now on, when we talk about minimization, we will really mean minimization or maximization.

The choice of the most adequate optimization algorithm depends on the properties satisfied by the objective function.

Therefore, finding the extrema of an objective function is closely related to finding the roots of the derivative. However, a point \(x_0\) satisfying this property is not necessarily an extremum.

Finally, let's note that a global minimum or maximum does not necessarily exist (the function can go to infinity). In that case, it may be necessary to constrain the space search; this is the subject of constrained optimization. 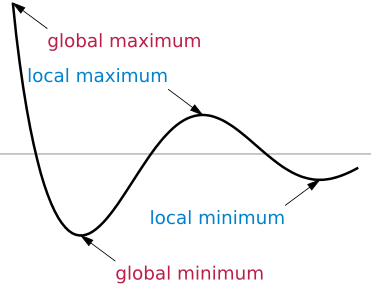 Here, the \(g_i\) and \(h_j\) are arbitrary functions defining the constraints.

For example, optimizing the aerodynamic shape of a car requires constraints on parameters such as the volume and mass of the car, the cost of the production process, and others.

Some global optimization algorithms are deterministic, others are stochastic. Stochastic methods are useful when dealing with the highly irregular and noisy functions that are typical of real-world data. Deterministic algorithms may be stuck in local minima, particularly if there are many non-global local minima. By spending some time exploring the space \(E\), stochastic algorithms may have a chance of finding a global minimum.