▶  Go to Chapter 9 : Numerical Optimization
▶  Get the Jupyter notebook

Mathematical optimization deals mainly with the problem of finding a minimum or a maximum of a mathematical function. Frequently, a real-world numerical problem can be expressed as a function minimization problem. Such examples can be found in statistical inference, machine learning, graph theory, and other areas.

Although there are many function minimization algorithms, a generic and universal method does not exist. Therefore, it is important to understand the differences between existing classes of algorithms, their specificities, and their respective use cases. We should also have a good understanding of our problem and our objective function; is it continuous, differentiable, convex, multidimensional, regular, or noisy? Is our problem constrained or unconstrained? Are we seeking local or global minima?

In this recipe, we will demonstrate a few usage examples of the function minimization algorithms implemented in SciPy.

1.  We import the libraries:

2.  First, let's define a simple mathematical function (the opposite of the cardinal sine). This function has many local minima but a single global minimum (https://en.wikipedia.org/wiki/Sinc_function): 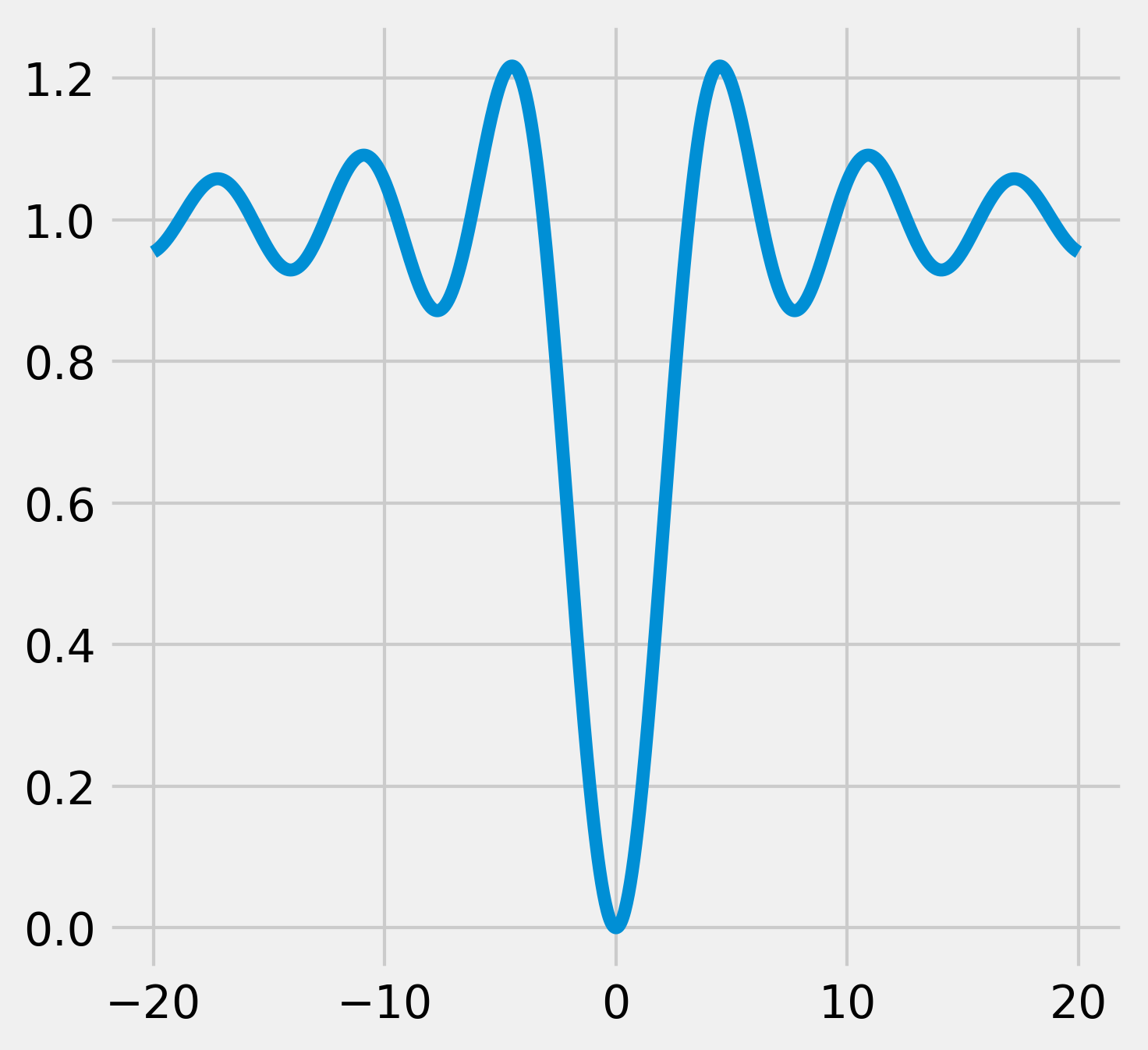 Starting from \(x_0=3\), the algorithm was able to find the actual global minimum, as shown in the following figure: 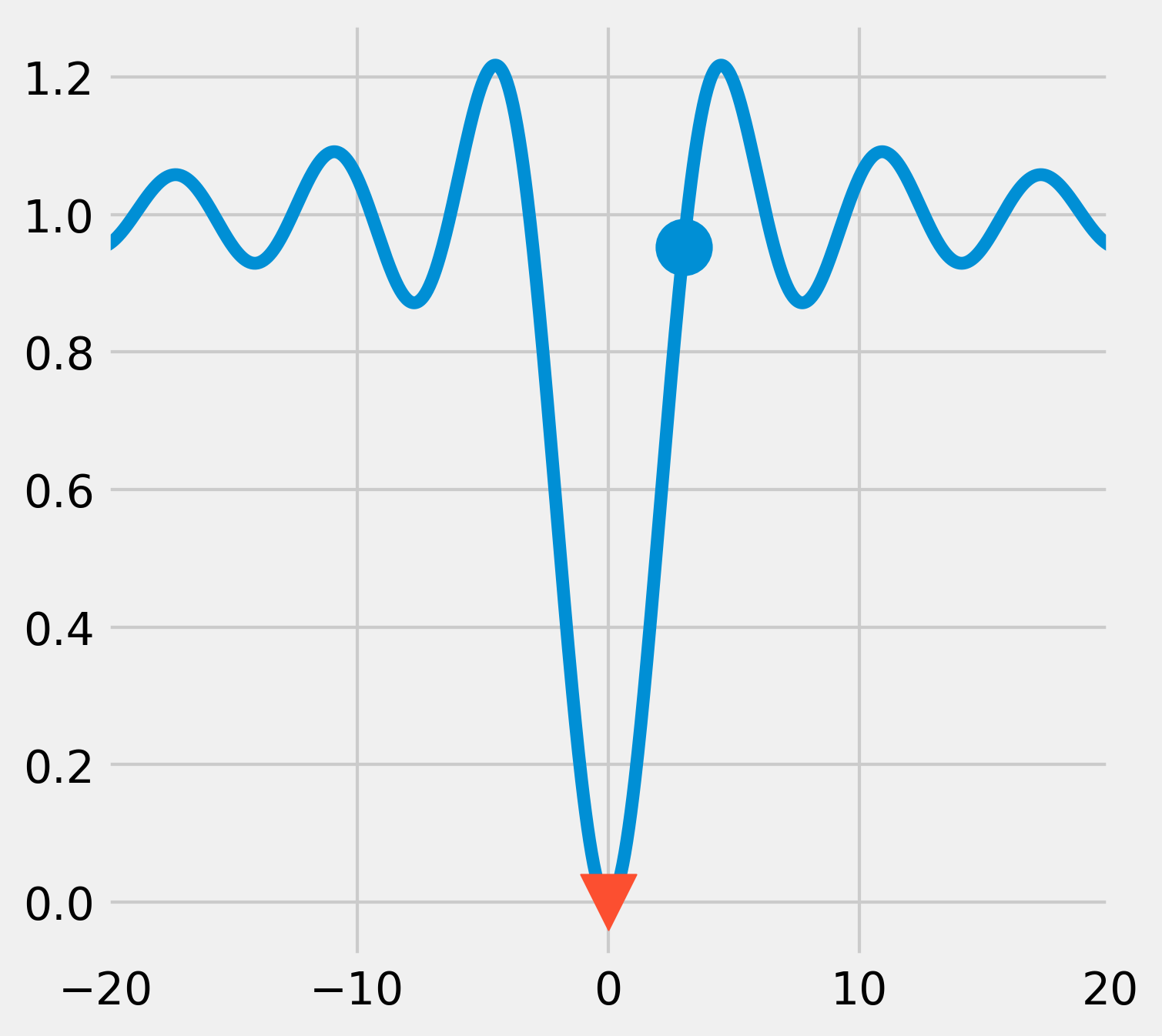 5.  Now, if we start from an initial point that is further away from the actual global minimum, the algorithm converges towards a local minimum only: 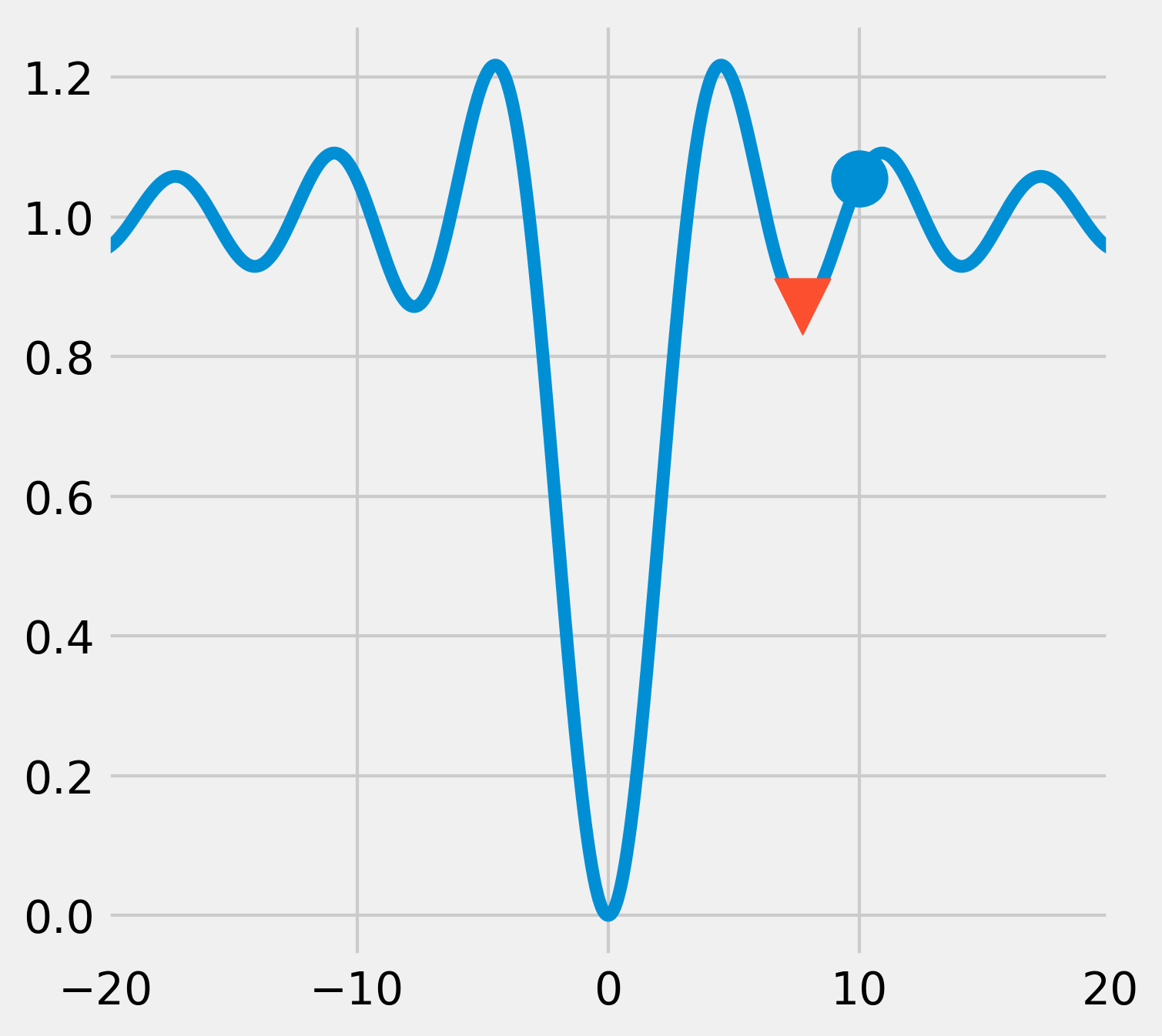 6.  Like most function minimization algorithms, the BFGS algorithm is efficient at finding local minima, but not necessarily global minima, especially on complicated or noisy objective functions. A general strategy to overcome this problem is to combine such algorithms with an exploratory grid search on the initial points. Another option is to use a different class of algorithms based on heuristics and stochastic methods. An example is the basin-hopping algorithm: 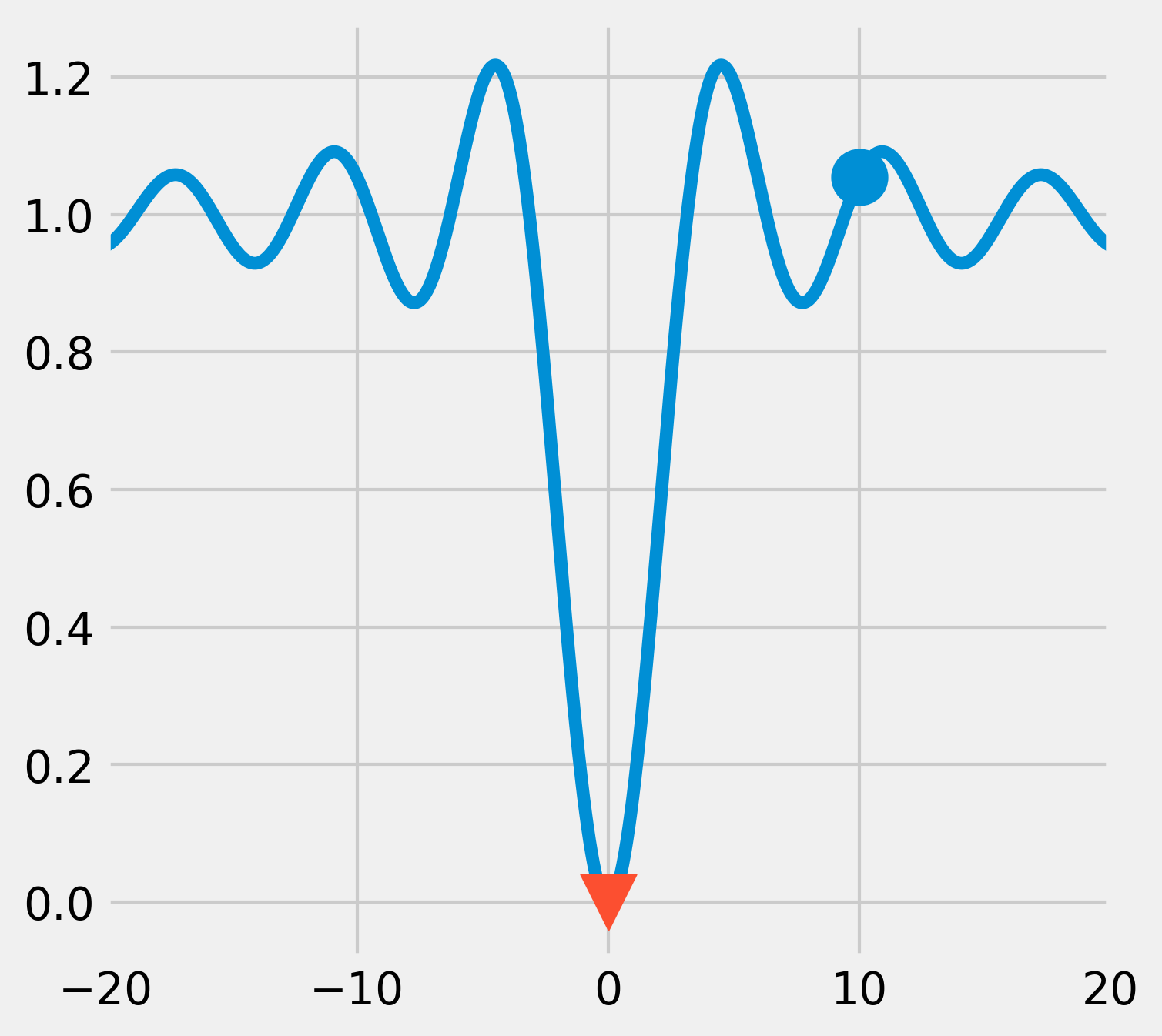 This time, the algorithm was able to find the global minimum.

This function is very irregular and may be difficult to minimize in general. The expected global minimum is \((1, 1)\). The Lévi function is one of the many test functions for optimization that researchers have developed to study and benchmark optimization algorithms (https://en.wikipedia.org/wiki/Test_functions_for_optimization): 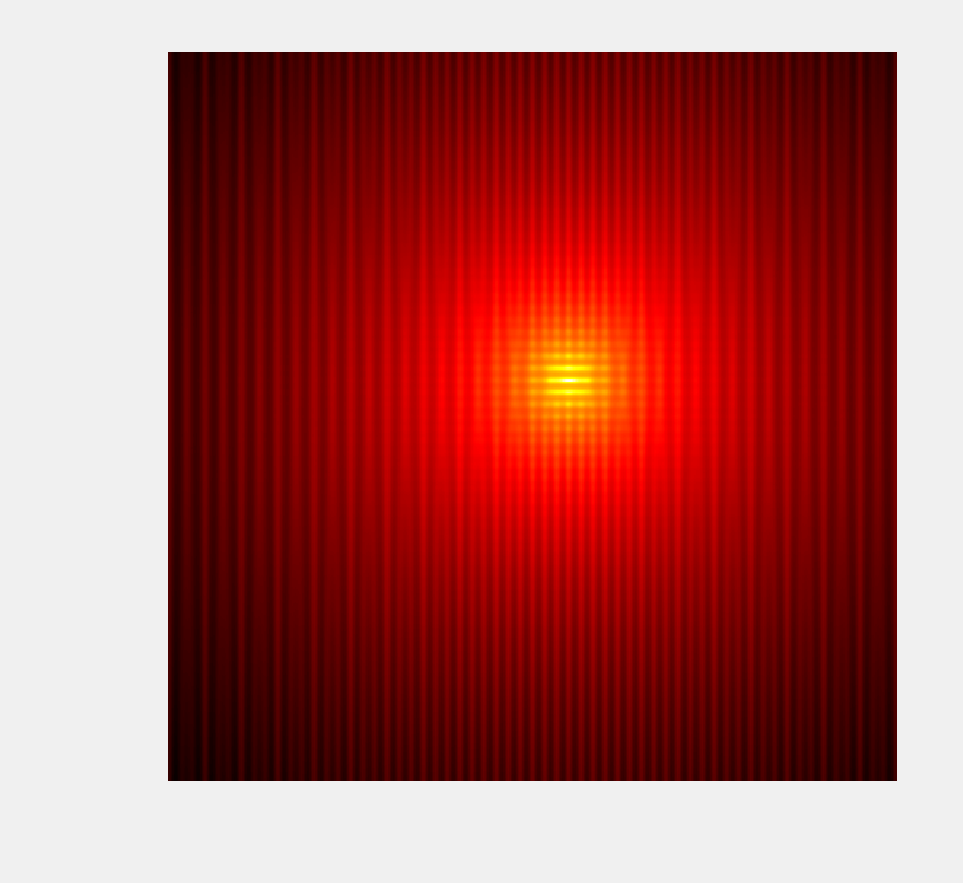 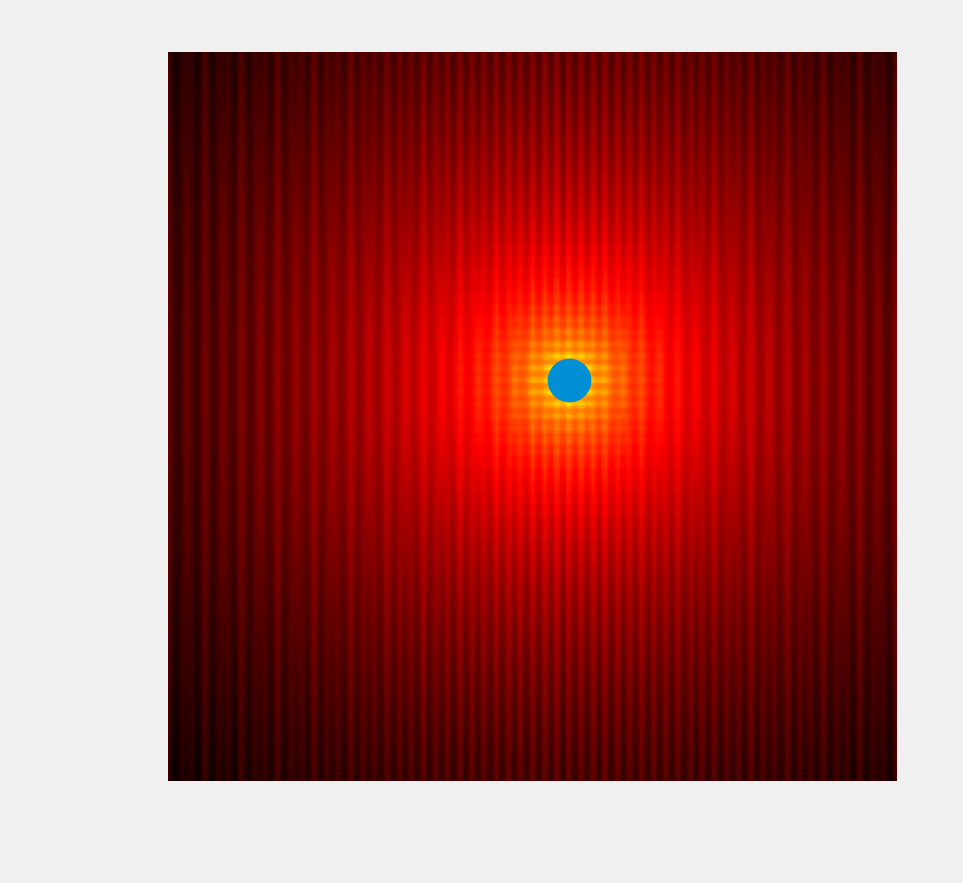 Many function minimization algorithms are based on the fundamental idea of gradient descent. If a function \(f\) is differentiable, then at every point, the opposite of its gradient points to the direction of the greatest decrease rate of the function. By following this direction, we can expect to find a local minimum.

This operation is generally done iteratively, by following the direction of the gradient with a small step. The way this step is computed depends on the optimization method.

Newton's method can also be used in this context of function minimization. The idea is to find a root of \(f'\) with Newton's method, thereby making use of the second derivative \(f''\). In other words, we approximate \(f\) with a quadratic function instead of a linear function. In multiple dimensions, this is done by computing the Hessian (second derivatives) of \(f\). By performing this operation iteratively, we can expect the algorithm to converge towards a local minimum.

The basin-hopping algorithm is a stochastic algorithm that seeks a global minimum by combining random perturbation of the positions and local minimization.

There are many stochastic global optimization methods based on metaheuristics. They are generally less well-theoretically grounded than the deterministic optimization algorithms previously described, and convergence is not always guaranteed. However, they may be useful in situations where the objective function is very irregular and noisy, with many local minima. The Covariance Matrix Adaptation Evolution Strategy (CMA-ES) algorithm is a metaheuristic that performs well in many situations. It is currently not implemented in SciPy, but there's a Python implementation in one of the references given later.

SciPy's minimize() function accepts a method keyword argument to specify the minimization algorithm to use. This function returns an object containing the results of the optimization. The x attribute is the point reaching the minimum.

Here are a few further references: