In this chapter, we will cover the following topics:

Signals are mathematical functions that describe the variation of a quantity across time or space. Time-dependent signals are often called time series. Examples of time series include share prices, which are typically presented as successive points in time spaced at uniform time intervals. In physics or biology, experimental devices record the evolution of variables such as electromagnetic waves or biological processes.

In signal processing, a general objective consists of extracting meaningful and relevant information from raw, noisy measurements. Signal processing topics include signal acquisition, transformation, compression, filtering, and feature extraction, among others. When dealing with a complex dataset, it can be beneficial to clean it before applying more advanced mathematical analysis methods (such as machine learning, for instance).

In this concise chapter, we will illustrate and explain the main foundations of signal processing. In the next chapter, Chapter 11, Image and Audio Processing, we will see particular signal processing methods adapted to images and sounds.

First, we will give some important definitions in this introduction.

The following figure shows the difference between an analog signal (the continuous curve) and a digital signal (dots): 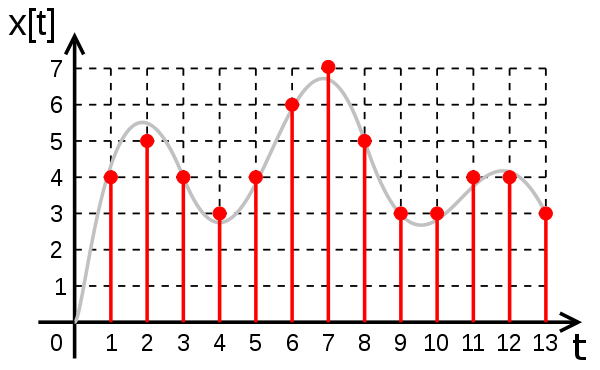 Analog signals are found in mathematics and in most physical systems such as electric circuits. Yet, computers being discrete machines, they can only understand digital signals. This is why computational science especially deals with digital signals.

A digital signal recorded by an experimental device is typically characterized by two important quantities:

Digital signals with high sampling rates and bit depths are more accurate, but they require more memory and processing power. These two parameters are limited by the experimental devices that record the signals.

Let's consider a continuous (analog) time-varying signal \(x(t)\). We record this physical signal with an experimental device, and we obtain a digital signal with a sampling rate of \(f_s\). The original analog signal has an infinite precision, whereas the recorded signal has a finite precision. Therefore, we expect to lose information in the analog-to-digital process.

The Nyquist–Shannon sampling theorem states that under certain conditions on the analog signal and the sampling rate, it is possible not to lose any information in the process. In other words, under these conditions, we can recover the exact original continuous signal from the sampled digital signal. For more details, refer to https://en.wikipedia.org/wiki/Nyquist%E2%80%93Shannon_sampling_theorem.

Here, the Fourier transform is a representation of a time-dependent signal in the frequency domain. The Nyquist criterion states that:

In other words, the signal must be bandlimited, meaning that it must not contain any frequency higher than a certain cutoff frequency \(B\). Additionally, the sampling rate \(f_s\) needs to be at least twice as large as this frequency \(B\). Here are a couple of definitions:

Under these conditions, we can theoretically reconstruct the original analog signal from the sampled digital signal.

Compressed sensing is a recent and important approach to signal processing. It acknowledges that many real-world signals are intrinsically low dimensional. For example, speech signals have a very specific structure depending on the general physical constraints of the human vocal tract.

Even if a speech signal has many frequencies in the Fourier domain, it may be well approximated by a sparse decomposition on an adequate basis (dictionary). By definition, a decomposition is sparse if most of the coefficients are zero. If the dictionary is chosen well, every signal is a combination of a small number of the basis signals.

This dictionary contains elementary signals that are specific to the signals considered in a given problem. This is different from the Fourier transform that decomposes a signal on a universal basis of sine functions. In other words, with sparse representations, the Nyquist condition can be circumvented. We can precisely reconstruct a continuous signal from a sparse representation containing fewer samples than what the Nyquist condition requires.

Sparse decompositions can be found with sophisticated algorithms. In particular, these problems may be turned into convex optimization problems that can be tackled with specific numerical optimization methods.

Compressed sensing has many applications in signal compression, image processing, computer vision, biomedical imaging, and many other scientific and engineering areas.