▶  Go to Chapter 10 : Signal Processing
▶  Get the Jupyter notebook

The autocorrelation of a time series can inform us about repeating patterns or serial correlation. The latter refers to the correlation between the signal at a given time and at a later time. The analysis of the autocorrelation can thereby inform us about the timescale of the fluctuations. Here, we use this tool to analyze the evolution of baby names in the US, based on data provided by the United States Social Security Administration.

1.  We import the following packages:

2.  We download the Babies dataset (available on the GitHub data repository of the book) using the requests third-party package. The dataset was obtained initially from the data.gov website (https://catalog.data.gov/dataset/baby-names-from-social-security-card-applications-national-level-data). We extract the archive locally in the babies subdirectory. There is one CSV file per year. Each file contains all baby names given that year with the respective frequencies.

3.  We read the data with pandas. We load the data in a dictionary, containing one DataFrame per year: 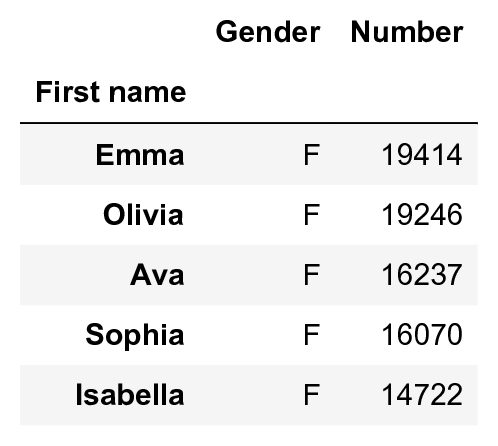 4.  We write functions to retrieve the frequencies of baby names as a function of the name, gender, and birth year:

5.  Let's define a function that computes the autocorrelation of a signal. This function is essentially based on NumPy's correlate() function.

6.  Now, we create a function that displays the evolution of a baby name as well as its (normalized) autocorrelation:

A time series is a sequence indexed by time. Important applications include stock markets, product sales, weather forecasting, biological signals, and many others. Time series analysis is an important part of statistical data analysis, signal processing, and machine learning.