▶  Go to Chapter 8 : Machine Learning
▶  Get the Jupyter notebook

In this recipe, we show how to handle text data with scikit-learn. Working with text requires careful preprocessing and feature extraction. It is also quite common to deal with highly sparse matrices.

We will learn to recognize whether a comment posted during a public discussion is considered insulting to one of the participants. We will use a labeled dataset from Impermium, released during a Kaggle competition (see http://www.kaggle.com/c/detecting-insults-in-social-commentary). 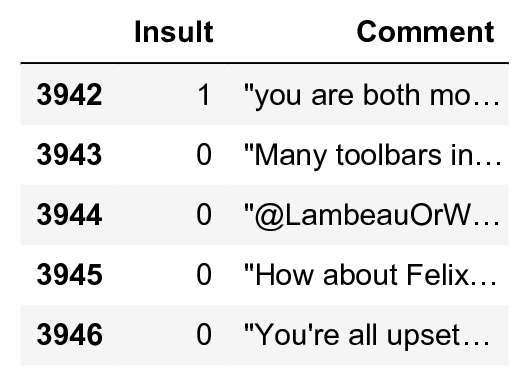 4.  Now, we are going to define the feature matrix X and the labels y:

Obtaining the feature matrix from the text is not trivial. scikit-learn can only work with numerical matrices. So how do we convert text into a matrix of numbers? A classical solution is to first extract a vocabulary, a list of words used throughout the corpus. Then, we count, for each sample, the frequency of each word. We end up with a sparse matrix, a huge matrix containing mostly zeros. Here, we do this in two lines. We will give more details in How it works....

The general rule here is that whenever one of our features is categorical (that is, the presence of a word, a color belonging to a fixed set of \(n\) colors, and so on), we should vectorize it by considering one binary feature per item in the class. For example, instead of a feature color being red, green, or blue, we should consider three binary features color_red, color_green, and color_blue. We give further references in the There's more... section.

5.  There are 3947 comments and 16469 different words. Let's estimate the sparsity of this feature matrix:

6.  Now, we are going to train a classifier as usual. We first split the data into a train and test set:

7.  We use a Bernoulli Naive Bayes classifier with a grid search on the \(\alpha\) parameter:

8.  Let's check the performance of this classifier on the test dataset:

9.  Let's take a look at the words corresponding to the largest coefficients (the words we find frequently in insulting comments):

10.  Finally, let's test our estimator on a few test sentences:

scikit-learn implements several utility functions to obtain a sparse feature matrix from text data. A vectorizer such as CountVectorizer()extracts a vocabulary from a corpus (fit()) and constructs a sparse representation of the corpus based on this vocabulary (transform()). Each sample is represented by the vocabulary's word frequencies. The trained instance also contains attributes and methods to map feature indices to the corresponding words (get_feature_names()) and conversely (vocabulary_).

N-grams can also be extracted: those are pairs or tuples of words occurring successively (ngram_range keyword).

The frequency of the words can be weighted in different ways. Here, we have used tf-idf, or term frequency-inverse document frequency. This quantity reflects how important a word is to a corpus. Frequent words in comments have a high weight except if they appear in most comments (which means that they are common terms, for example, "the" and "and" would be filtered out using this technique).

Naive Bayes algorithms are Bayesian methods based on the naive assumption of independence between the features. This strong assumption drastically simplifies the computations and leads to very fast yet decent classifiers.

Here are other natural language processing libraries in Python: