▶  Go to Chapter 14 : Graphs, Geometry, and Geographic Information Systems
▶  Get the Jupyter notebook

In this recipe, we build upon several techniques described in the previous recipes in order to create a simple GPS-like route planner in Python. We will retrieve California's road network data from the United States Census Bureau in order to find shortest paths in the road network graph. This will allow us to display road itineraries between any two locations in California.

At the time of this writing, gdal does not appear to work well with conda and Python 3.6. You may need to downgrade Python to Python 3.5 with conda install python=3.5.

2.  We load the data (a Shapefile dataset) with NetworkX. This dataset contains detailed information about the primary roads in California. NetworkX's read_shp() function returns a graph, where each node is a geographical position, and each edge contains information about the road linking the two nodes. The data comes from the United States Census Bureau website at http://www.census.gov/geo/maps-data/data/tiger.html.

3.  This graph is not necessarily connected, but we need a connected graph in order to compute shortest paths. Here, we take the largest connected subgraph using the connected_component_subgraphs() function:

5.  Each edge in the graph contains information about the road, including a list of points along this road. We first create a function that returns this array of coordinates, for any edge in the graph:

6.  We can notably use the road path to compute its length. We first need to define a function that computes the distance between any two points in geographical coordinates:

7.  Now, we define a function computing a path's length:

8.  We update our graph by computing the distance between any two connected nodes. We add this information with the distance attribute of the edges:

9.  The last step before we can find the shortest path in the graph is to find the two nodes in the graph that are closest to the two requested positions:

10.  Now, we use NetworkX's shortest_path() function to compute the shortest path between our two positions. We specify that the weight of every edge is the length of the road between them:

11.  The itinerary has been computed. The path variable contains the list of edges that form the shortest path between our two positions. Now, we can get information about the itinerary with pandas. The dataset has a few fields of interest, including the name and type (State, Interstate, and so on) of the roads: 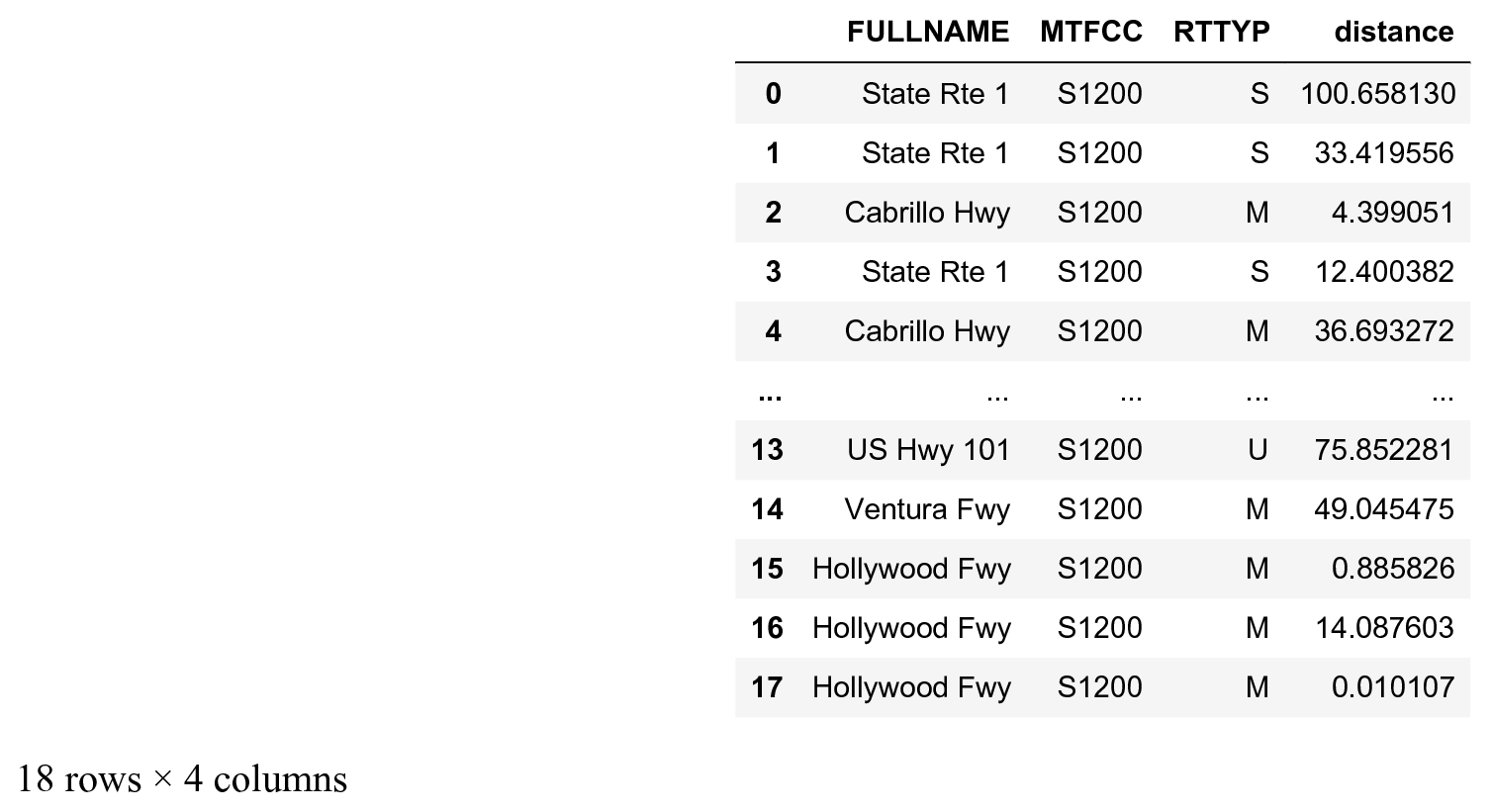 Here is the total length of this itinerary:

12.  Finally, let's display the itinerary on the map. We first retrieve the map with Smopy:

13.  Our path contains connected nodes in the graph. Every edge between two nodes is characterized by a list of points (constituting a part of the road). Therefore, we need to define a function that concatenates the positions along every edge in the path. We have to concatenate the positions in the right order along our path. We choose the order based on the fact that the last point in an edge needs to be close to the first point in the next edge:

14.  We convert the path in pixels in order to display it on the Smopy map:

15.  Finally, let's display the map, with our two positions and the computed itinerary between them: 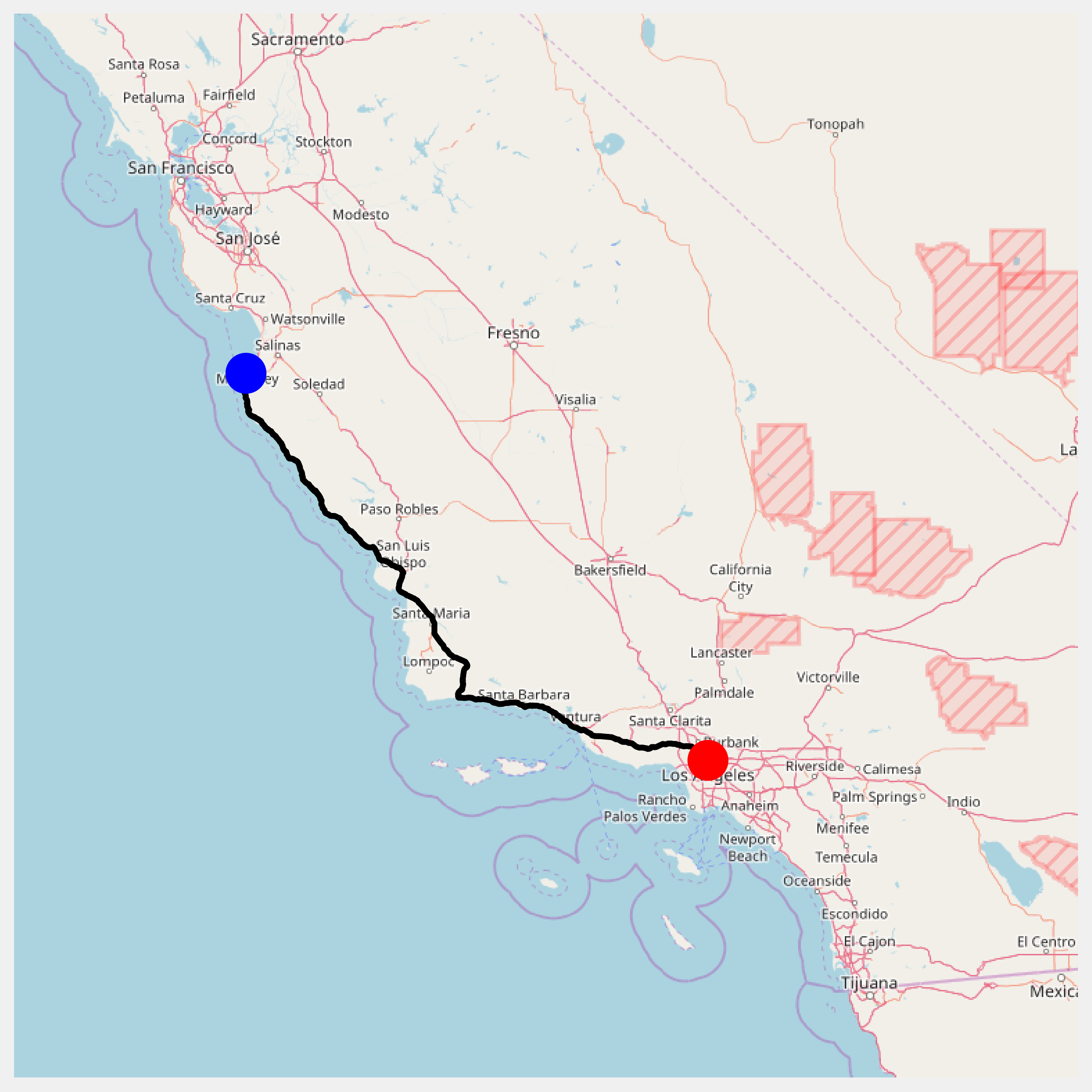 We computed the shortest path with NetworkX's shortest_path() function. Here, this function used Dijkstra's algorithm. This algorithm has a wide variety of applications, for example in network routing protocols.

There are different ways to compute the geographical distance between two points. Here, we used a relatively precise formula: the orthodromic distance (also called great-circle distance), which assumes that the Earth is a perfect sphere. We could also have used a simpler formula since the distance between two successive points on a road is small.

You can find more information about shortest path problems and Dijkstra's algorithm in the following references:

Here are a few references about geographical distances: