In this recipe, we illustrate a very common and useful method for characterizing a posterior distribution in a Bayesian model. Imagine that you have some data and you want to obtain information about the underlying random phenomenon. In a frequentist approach, you could try to fit a probability distribution within a given family of distributions, using a parametric method such as the maximum likelihood method. The optimization procedure would yield parameters that maximize the probability of observing the data if given the null hypothesis.

A typical goal for Bayesian inference is to characterize the posterior distributions. Bayes' theorem gives an analytical way to do this, but it is often impractical in real-world problems due to the complexity of the models and the number of dimensions. A Markov chain Monte Carlo method, such as the Metropolis-Hastings algorithm, gives a numerical method to approximate a posterior distribution.

Here, we introduce the PyMC3 package, which gives an effective and natural interface for fitting a probabilistic model to data in a Bayesian framework. We will look at the annual frequency of storms in the northern Atlantic Ocean since the 1850s using data from NOAA, the US' National Oceanic and Atmospheric Administration. This example is largely inspired by the tutorial available in the official PyMC3 documentation at http://docs.pymc.io/notebooks/getting_started.html#Case-study-2:-Coal-mining-disasters.

You need PyMC3, available at http://docs.pymc.io. You can install it with conda install -c conda-forge pymc3.

2.  Let's import the data with pandas:

3.  With pandas, it only takes a single line of code to get the annual number of storms in the North Atlantic Ocean. We first select the storms in that basin (NA), then we group the rows by year (Season), and finally we take the number of unique storms (Serial_Num), as each storm can span several days (the nunique() method): 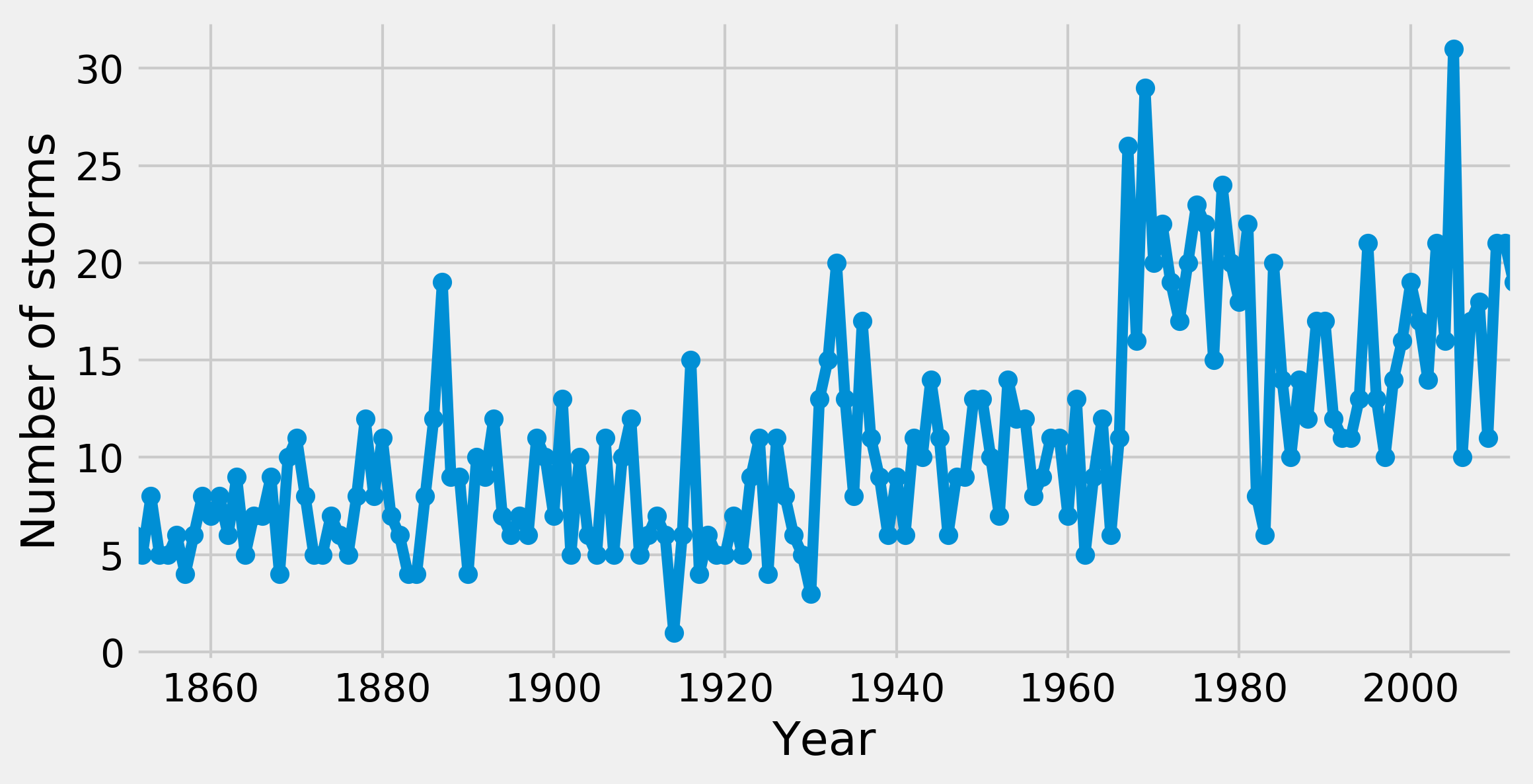 4.  Now, we define our probabilistic model. We assume that storms arise following a time-dependent Poisson process with a deterministic rate. We assume that this rate is a piecewise-constant function that takes a first value early_mean before a switch point switchpoint, and a second value late_mean after that point. These three unknown parameters are treated as random variables (we will describe them more in the How it works... section). In the model, the annual number of storms per year follows a Poisson distribution (this is a property of Poisson processes).

A Poisson process (https://en.wikipedia.org/wiki/Poisson_process) is a particular point process, that is, a stochastic process describing the random occurrence of instantaneous events. The Poisson process is fully random: the events occur independently at a given rate. See also Chapter 13, Stochastic Dynamical Systems.

5.  Now, we sample from the posterior distribution given the observed data. The sample(10000) method launches the fitting iterative procedure with 10000 iterations, which may take a few seconds:

6.  Once the sampling has finished, we can plot the distribution and paths of the Markov chains:

7.  Taking the sample mean of these distributions, we get posterior estimates for the three unknown parameters, including the year where the frequency of storms suddenly increased:

8.  Finally, we can plot the estimated rate on top of the observations: 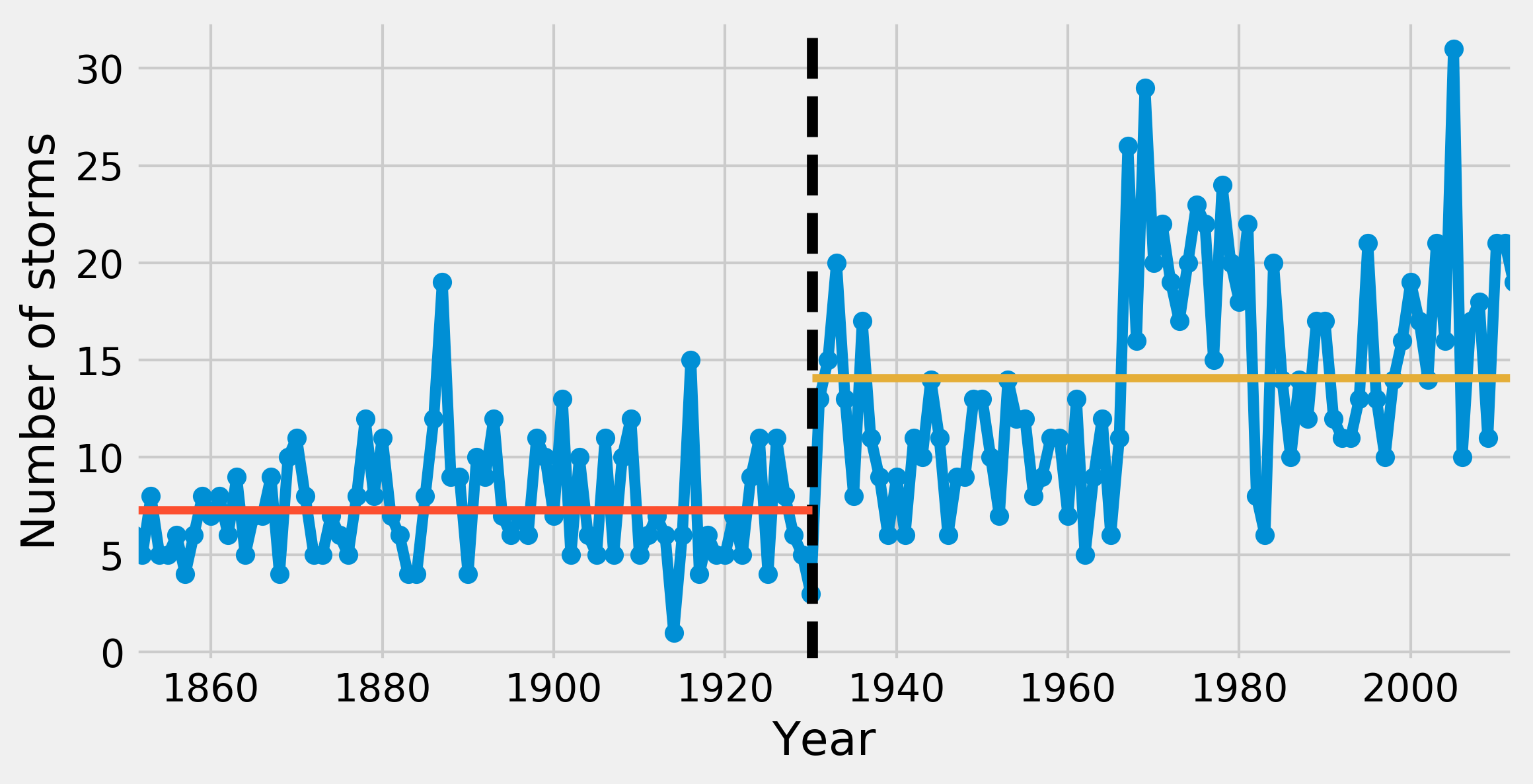 The general idea is to define a Bayesian probabilistic model and to fit it to the data. This model may be the starting point of an estimation or decision task. The model is essentially described by stochastic or deterministic variables linked together within a direct acyclic graph (DAG). A is linked to B if B is entirely or partially determined by A. The following figure shows the graph of the model used in this recipe: 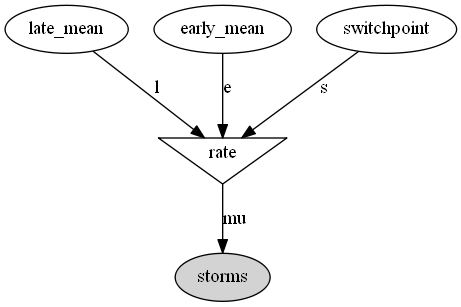 Stochastic variables follow distributions that can be parameterized by fixed numbers or other variables in the model. Parameters may be random variables themselves, reflecting knowledge prior to the observations. This is the core of Bayesian modeling.

The goal of the analysis is to include the observations into the model in order to update our knowledge as more and more data is available. Although Bayes' theorem gives us an exact way to compute those posterior distributions, it is rarely practical in real-world problems. This is notably due to the complexity of the models. Alternatively, numerical methods have been developed in order to tackle this problem.

The Markov chain Monte Carlo (MCMC) method used here allows us to sample from a complex distribution by simulating a Markov chain that has the desired distribution as its equilibrium distribution. The Metropolis-Hastings algorithm is a particular application of this method to our current example.