Graphics Processing Units (GPUs) are powerful processors specialized in real-time rendering. We find GPUs in virtually any computer, laptop, video game console, tablet, or smartphone. Their massively parallel architecture comprises tens to thousands of cores. The video game industry has been fostering the development of increasingly powerful GPUs over the last two decades.

Since the mid-2000s, GPUs are no longer limited to graphics processing. We can now implement scientific algorithms on a GPU. The only condition is that the algorithm follows the SIMD (Single Instruction, Multiple Data) paradigm, where a sequence of instructions is executed in parallel with multiple data. This is called General Purpose Programming on Graphics Processing Units (GPGPU). GPGPU is used in many areas: meteorology, machine learning (most particularly deep learning), computer vision, image processing, finance, physics, bioinformatics, and many more. Writing code for GPUs can be challenging as it requires understanding the internal architecture of the hardware.

CUDA is a proprietary GPGPU framework created in 2007 by NVIDIA Corporation, one of the main GPU manufacturers. Programs written in CUDA only work on NVIDIA graphics cards. There is another competing GPGPU framework called OpenCL, an open standard supported by other major companies. OpenCL programs can work on GPUs and CPUs from most manufacturers (notably NVIDIA, AMD, and Intel).

CUDA kernels are typically written in a C dialect that runs on the GPU. However, Numba allows us to CUDA kernels in Python. Numba takes care of compiling the code automatically for the GPU.

In this recipe, we will implement the embarrassingly parallel computation of the Mandelbrot fractal in CUDA using Numba.

You need an NVIDIA graphics processing unit installed on your computer. You also need the CUDA toolkit which you can install with conda install cudatoolkit.

3.  We write our function in Python. It will be compiled to CUDA code. The object m represents a pointer to the array stored on the GPU. The function is called on the GPU in parallel on every pixel of the image. Numba provides a cuda.grid() function that gives the index of the pixel in the image:

4.  We initialize the matrix:

5.  We initialize the execution grid (see the How it works... section):

6.  We execute the GPU function, passing our empty array: 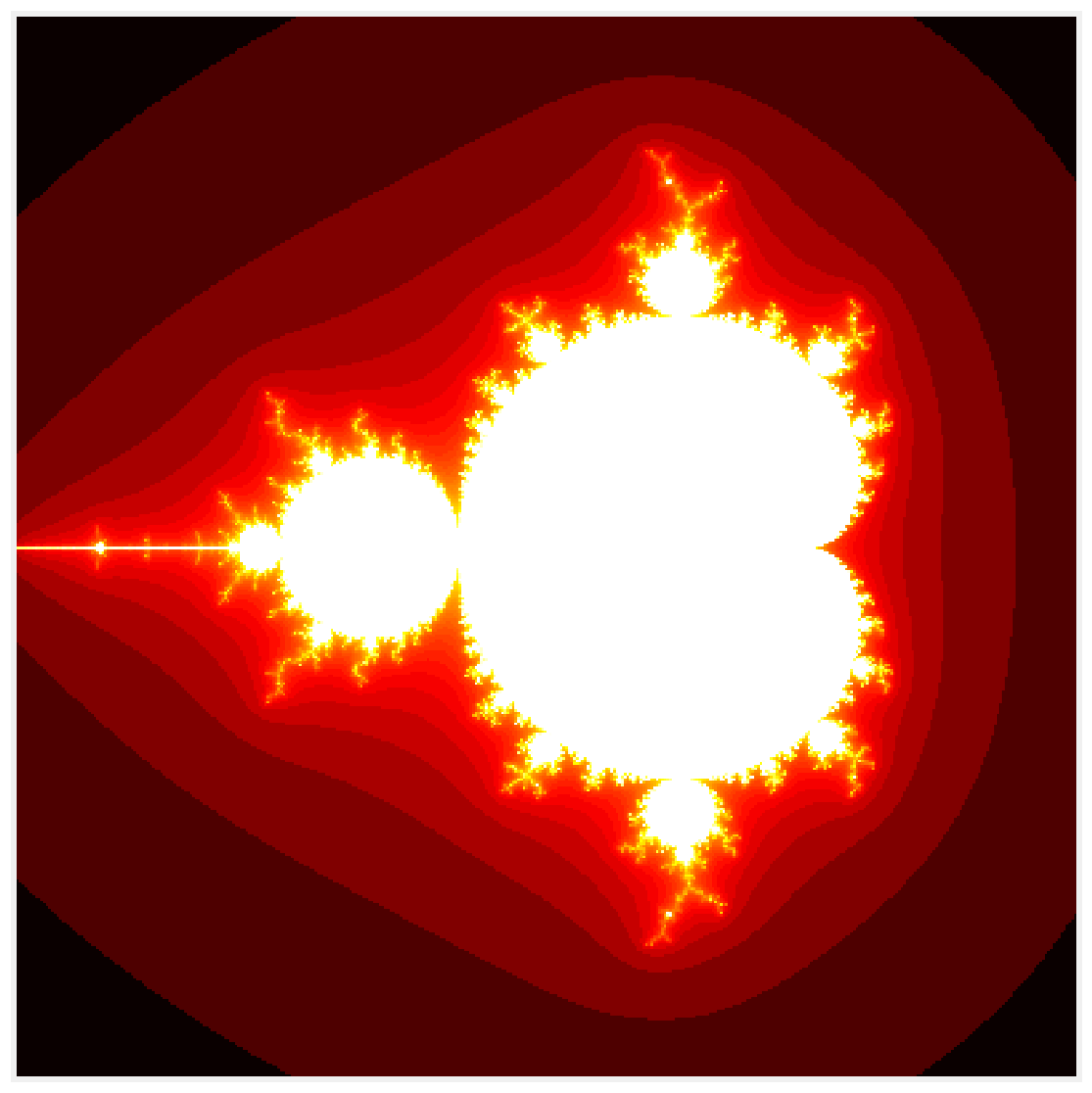 9.  Numba takes care of transferring arrays automatically between the host machine (CPU) and the device (GPU). These data transfers are slow, sometimes even more than the actual on-device computation. Numba provides facilities to deal with these transfers manually, which can be interesting in some use-cases. Let's estimate the time of the data transfers and the computation on the GPU.

First, we send the NumPy array to the GPU with the cuda.to_device() function:

10.  Second, we run the computation on the GPU:

11.  Third, we copy the modified array from the GPU to the CPU.

This astronomic speed improvement is explained by the fact that the GPU version is compiled and runs on 1536 CUDA cores on the NVIDIA GTX 980M, whereas the pure Python version is interpreted and runs on 1 CPU.

GPU programming is a rich and highly technical topic, encompassing low-level architectural details of GPUs. Of course, we only scratched the surface here with the simplest paradigm possible (the "embarrassingly parallel" problem). We give further references in a later section.

Central notions to the CUDA programming model are those of kernels, threads, blocks, and grids:

The number of threads per block is limited by the size of the multiprocessors and depends on the graphics card model (1024, for example). However, a grid can contain an arbitrary number of blocks.

Within a block, threads are executed within warps of typically 32 threads. Better performance is achieved when conditional branching in a kernel is organized into groups of 32 threads.

Threads within a block can synchronize at synchronization barriers using the CUDA __syncthreads() function. This feature enables inter-thread communication within one block. However, blocks execute independently so that two threads from different blocks cannot synchronize.

Within a block, threads are organized into a 1D, 2D, or 3D structure, and similarly for blocks within a grid, as shown in the following figure. This structure is convenient as it matches most common multidimensional datasets encountered in real-world problems. 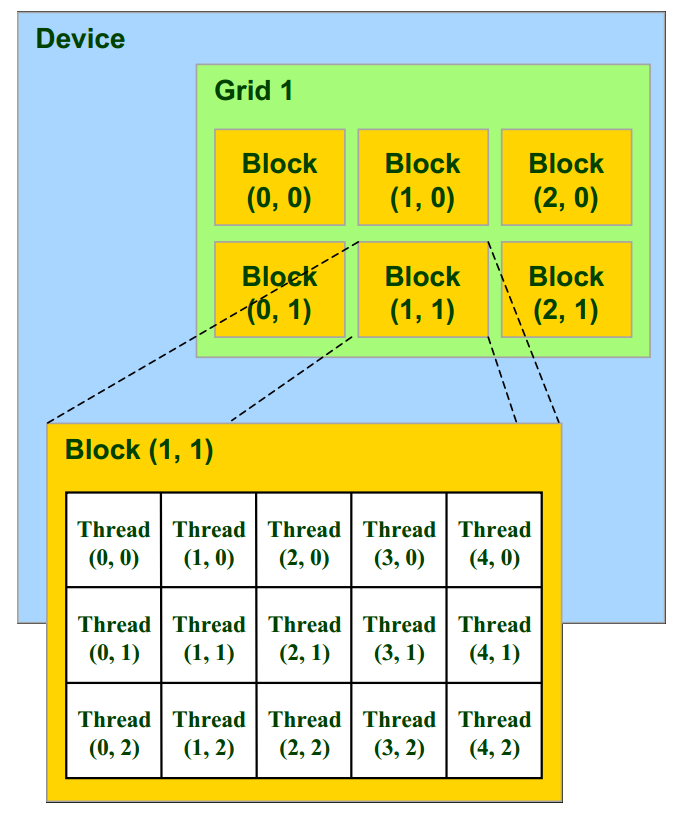 In CUDA, the kernel can retrieve the thread index within the block (threadIdx), as well as the block index within the grid (blockIdx) to determine which bit of data it should work on. In this recipe, the 2D image of the fractal is partitioned into 16 x 16 blocks, each block containing 256 pixels, with one thread per pixel. The kernel computes the color of a single pixel.

Numba provides the cuda.grid(ndim) function to obtain directly the 1D, 2D, or 3D index of the thread within the grid. Alternatively, one can use the following code snippet to control the exact position of the current thread within the block and the grid (code given in the Numba documentation):

There are several levels of memory on the GPU, ranging from small, fast, and local memory shared by a few threads within a block; to large, slow, and global memory shared by all blocks. We need to tweak the memory access patterns in the code to match the hardware constraints and achieve higher performance. In particular, data access is more efficient when the threads within a warp access consecutive addresses in the global memory; the hardware coalesces all memory accesses into a single access to consecutive DRAM (Dynamic Random Access Memory) locations.