In this recipe, we will consider a more complicated Cython example. Starting from a slow implementation in pure Python, we will use different Cython features to speed it up progressively.

We will implement a very simple ray tracing engine. Ray tracing consists of rendering a scene by simulating the physical properties of light propagation. This rendering method leads to photorealistic scenes, but it is computationally intensive.

Here, we will render a single sphere with diffuse and specular lighting. First we'll give the example's code in pure Python. Then, we will accelerate it incrementally with Cython.

The code is long and contains many functions. We will first give the full code of the pure Python version. Then, we will just describe the changes required to accelerate the code with Cython. The entire scripts are available on the book's website.

2.  We create a normalization function for vectors:

3.  We create a function that computes the intersection of a ray with a sphere:

4.  The following function traces a ray:

5.  Finally, the main loop is implemented in the following function:

6.  Now, we initialize the scene and define a few parameters:

In this figure, the left panel shows the result of this recipe's code. The right panel shows an extended version of the simple ray tracing engine implemented here.

8.  How slow is this implementation (ray1 example on the book's website)?

9.  If we just use the %%cython magic with the adequate import numpy as np and cimport numpy as np commands at the top of the cell, we only get a ~6% speed improvement (ray2 example). 10.  We could do better by giving information about the type of the variables. Since we use vectorized computations on NumPy arrays, we cannot easily use memory views. Rather, we will use array buffers. First, at the very beginning of the Cython module (or %%cython cell), we declare NumPy data types as follows:

Then, we declare a NumPy array with cdef np.ndarray[DBL_C, ndim=1] (in this example, a 1D array of double precision floating point numbers). There is a difficulty here because NumPy arrays can only be declared inside functions, not at the top level. Thus, we need to slightly tweak the overall architecture of the code by passing some arrays as function arguments instead of using global variables. However, even by declaring the type of all variables, we gain no speedup at all (ray3 example).

11.  In the current implementation, we incur a performance hit because of the large number of NumPy function calls on tiny arrays (three elements). NumPy is designed to deal with large arrays, and it does not make much sense to use it for arrays that small. In this specific situation, we can try to bypass NumPy by rewriting some functions using the C standard library. We use the cdef keyword to declare a C-style function. These functions can yield significant performance speedups. Here is the C function replacing normalize():

12.  To get the most interesting speedups, we need to completely bypass NumPy. Where do we use NumPy precisely?

In order to bypass NumPy in our example, we need to reimplement all these features for our specific needs. The first possibility is to use a native Python type for vectors (for example, tuples), and write C-style functions that implement operations on tuples (always assuming they have exactly three elements). For example, the addition between two tuples can be implemented as follows:

This time, we get 18x speedup compared to the pure Python version (ray5 example)! But we can do even better...

13.  We are going to define a pure C structure instead of using a Python type for our vectors. In other words, we are not only bypassing NumPy, but we are also bypassing Python by moving to pure C code. To declare a C structure representing a 3D vector in Cython, we can use the following code:

To create a new Vec3 variable, we can use the following function:

As an example, here is the function used to add two Vec3 objects:

The code can be updated to make use of these fast C-style functions. Finally, the image can be declared as a 3D memory view. With all these changes, the Cython implementation runs in ~8 ms instead of almost a couple of seconds, or 330 times faster (ray6 example)!

In summary, we have achieved a very interesting speedup by basically rewriting the entire implementation in C with an enhanced Python syntax.

Let's explain briefly how the ray tracing code works. We model a three-dimensional scene with objects such as planes and spheres (here, there is only one sphere). There is also a camera and a plane representing the rendered image: 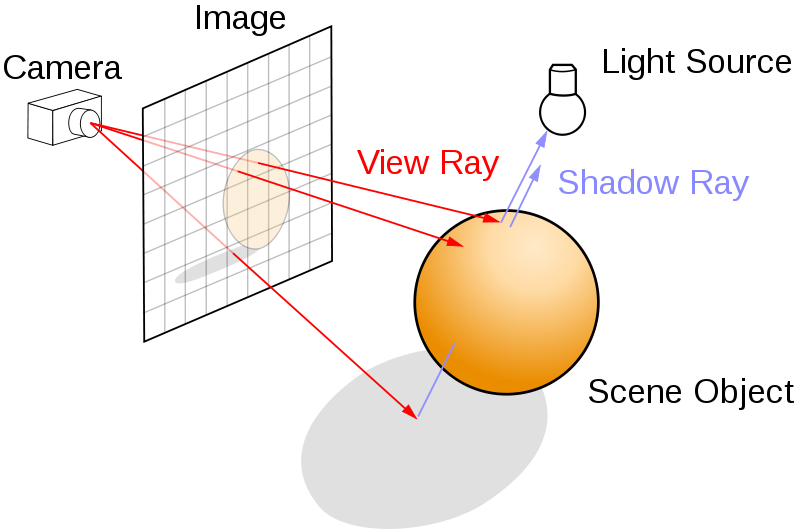 There is a main loop over all pixels of the image. For each pixel, we launch a ray from the camera center to the scene through the current pixel and compute the first intersection point between that ray and an object from the scene. Then, we compute the pixel's color as a function of the object material's color, the position of the lights, the normal of the object at the intersection point, and so on. There are several physics-based lighting equations that describe how the color depends on these parameters. Here, we use the Blinn-Phong shading model with ambient, diffuse, and specular lighting components:

Of course, a full ray tracing engine is far more complex than what we have implemented in this example. We can model other optic and lighting characteristics such as reflections, refractions, shadows, depth of field, and others. It is also possible to implement ray tracing algorithms on the graphics card for real-time photorealistic rendering. Here are a few references:

Although powerful, Cython requires a good understanding of Python, NumPy, and C. The most interesting performance speedups are achieved when dynamically-typed Python variables are converted to statically-typed C variables, notably within tight loops.