▶  Go to Chapter 2 : Best practices in Interactive Computing
▶  Get the Jupyter notebook

Using a version control system is an absolute requirement in programming and research. This is the tool that makes it barely impossible to lose one's work. In this recipe, we will cover the basics of Git.

Notable distributed version control systems include Git, Mercurial, and Bazaar, among others. In this chapter, we will use the popular Git system. You can download the Git program and Git GUI clients from http://git-scm.com.

An online provider allows you to host your code in the cloud. You can use it as a backup of your work and as a platform to share your code with your colleagues. These services include GitHub (https://github.com), Gitlab (https://gitlab.com), and Bitbucket (https://bitbucket.org). All of these websites offer free and paid plans with unlimited public and/or private repositories.

GitHub offers desktop applications for Windows and macOS at https://desktop.github.com/.

This book's code is stored on GitHub. Most Python libraries are also developed on GitHub.

1.  The very first thing to do when starting a new project or computing experiment is create a new folder locally:

2.  We initialize a Git repository:

Git created a  .git subdirectory that contains all the parameters and history of the repository.

7.  Next, we edit the file by appending an exclamation mark:

8.  We can see the differences between the current state of our repository, and the state in the last commit:

The output of git diff shows that the contents of file.txt were changed from Hello world to Hello world!. Git compares the states of all tracked files and computes the differences between the files.

9.  We can also get a summary of the changes as follows:

The git status command gives a summary of all changes since the last commit. The git diff --stat command shows, for each modified text file, the number of changed lines.

10.  Finally, we commit our change with a shortcut that automatically adds all changes in the tracked files (-a option):

When you start a new project or a new computing experiment, create a new folder on your computer. You will eventually add code, text files, datasets, and other resources in this folder. The distributed version control system keeps track of the changes you make to your files as your project evolves. It is more than a simple backup, as every change you make on any file can be saved along with the corresponding timestamp. You can even revert to a previous state at any time; never be afraid of breaking your code anymore!

Git works best with text files. It can handle binary files but with limitations. It is better to use a separate system such as Git Large File Storage, or Git LFS (see https://git-lfs.github.com/).

Specifically, you can take a snapshot of your project at any time by doing a commit. The snapshot includes all staged (or tracked) files. You are in total control of which files and changes will be tracked. With Git, you specify a file as staged for your next commit with git add, before committing your changes with git commit. The git commit -a command allows you to commit all changes in the files that are already being tracked.

When committing, you should provide a clear and short message describing the changes you made. This makes the repository's history considerably more informative than just writing "work in progress". If the commit message is long, write a short title (less than 50 characters), insert two line breaks, and write a longer description.

How often should you commit? The answer is very often. Git only takes responsibility of your work when you commit changes. What happens between two commits may be lost, so you'd better commit very regularly. Besides, commits are quick and cheap as they are local; that is, they do not involve any remote communication with an external server.

We can also create a new repository on an online git provider such as GitHub: 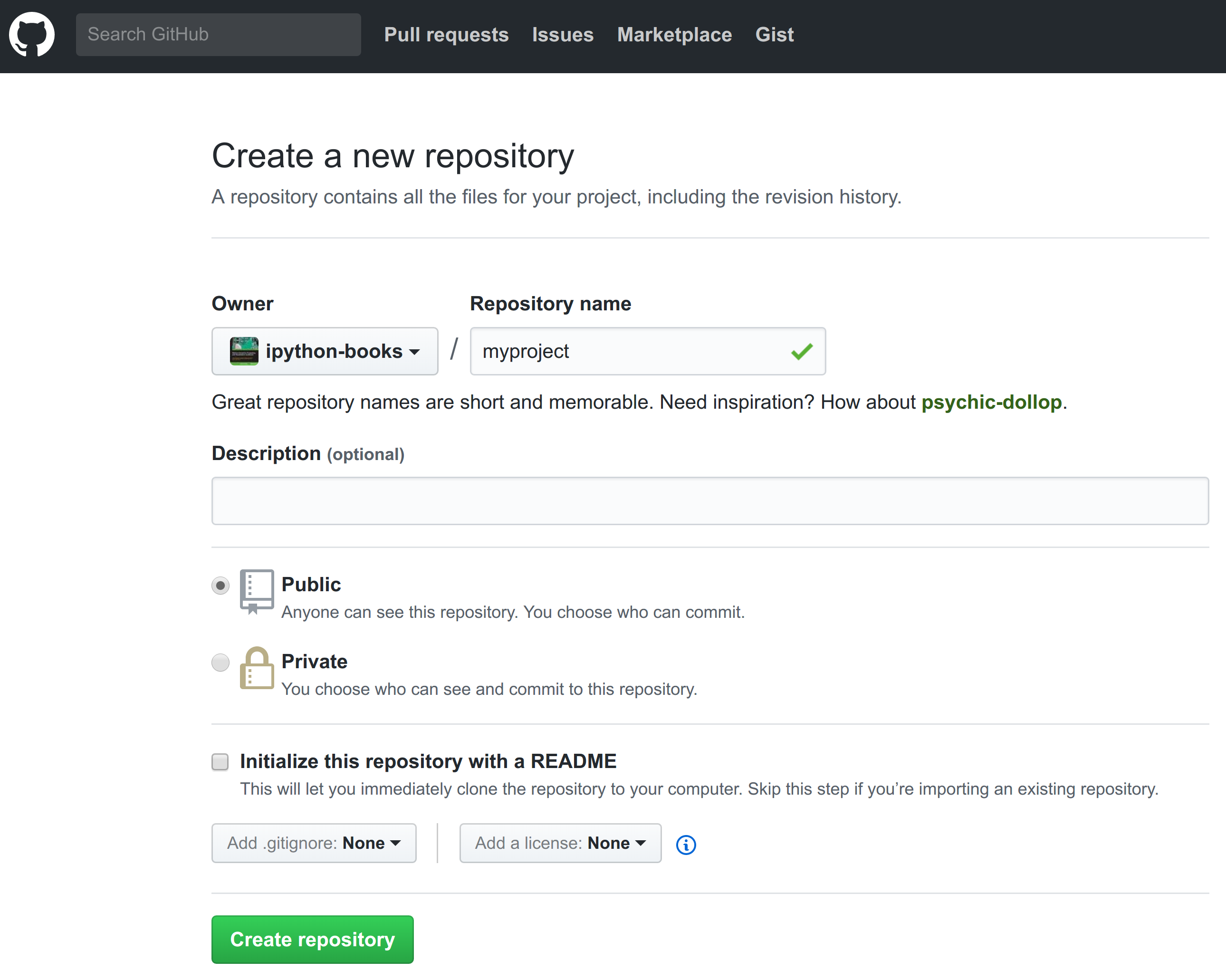 On the main webpage of the newly created project, click on the Clone or download button to get the repository URL and type in a terminal:

The simplistic workflow shown in this recipe is linear. In practice though, workflows with Git are typically nonlinear; this is the concept of branching. We will describe this idea in the next recipe, A typical workflow with Git branching.

Here are some references on Git: