▶  Go to Chapter 12 : Deterministic Dynamical Systems
▶  Get the Jupyter notebook

Ordinary Differential Equations (ODEs) describe the evolution of a system subject to internal and external dynamics. Specifically, an ODE links a quantity depending on a single independent variable (time, for example) to its derivatives. In addition, the system can be under the influence of external factors. A first-order ODE can typically be written as:

More generally, an \(n\)-th order ODE involves successive derivatives of \(y\) until the order \(n\). The ODE is said to be linear or nonlinear depending on whether \(f\) is linear in \(y\) or not.

ODEs naturally appear when the rate of change of a quantity depends on its value. Therefore, ODEs are found in many scientific disciplines such as mechanics (evolution of a body subject to dynamic forces), chemistry (concentration of reacting products), biology (spread of an epidemic), ecology (growth of a population), economics, and finance, among others.

2.  We define a few parameters appearing in our model:

5.  Now, we simulate the system for different values of \(k\). We use the SciPy odeint() function, defined in the scipy.integrate package.

Starting with SciPy 1.0, the generic scipy.integrate.solve_ivp() function can be used instead of the old function odeint(): 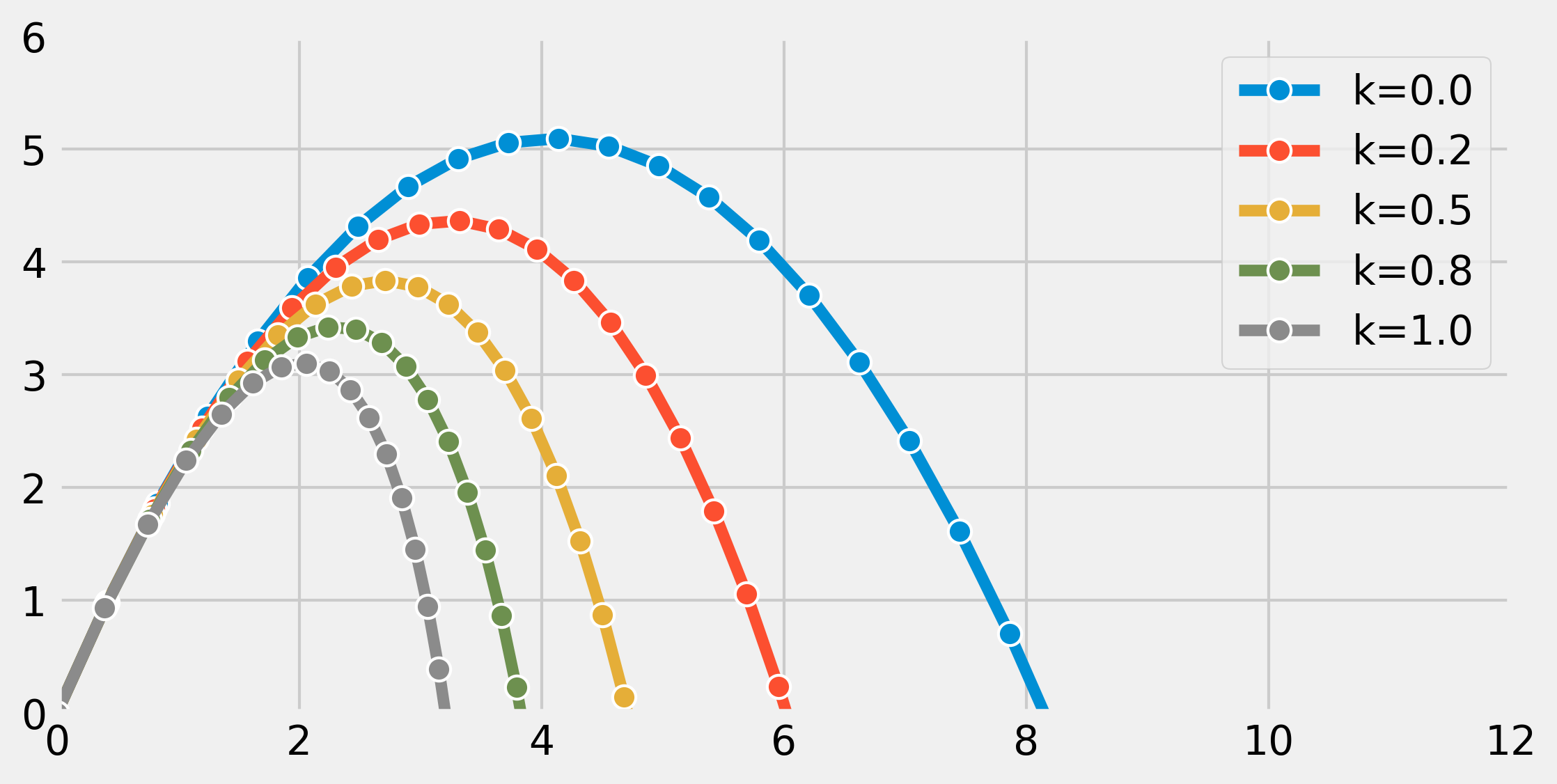 In the preceding figure, the most outward trajectory (blue) corresponds to drag-free motion (without air resistance). It is a parabola. In the other trajectories, we can observe the increasing effect of air resistance, parameterized with \(k\).

Let's explain how we obtained the differential equation from our model. Let \(u = (x,y)\) encode the 2D position of our particle with mass \(m\). This particle is subject to two forces: gravity \(mg = (0, -9.81 \cdot m)\) and air drag \(F = -ku'\). This last term depends on the particle's speed and is only valid at low speed. With higher speeds, we need to use more complex nonlinear expressions.

Now, we use Newton's second law of motion in classical mechanics. This law states that, in an inertial reference frame, the mass multiplied by the acceleration of the particle is equal to the sum of all forces applied to that particle. Here, we obtain:

We immediately obtain our second-order ODE:

The last term can be expressed as a function of \(v\) only.

The SciPy odeint() function is a black-box solver; we simply specify the function that describes the system, and SciPy solves it automatically. This function leverages the FORTRAN library ODEPACK, which contains well-tested code that has been used for decades by many scientists and engineers.

An example of a simple numerical solver is the Euler method. To numerically solve the autonomous ODE \(y'=f(y)\), the method consists of discretizing time with a time step \(dt\) and replacing \(y'\) with a first-order approximation:

Then, starting from an initial condition \(y_0 = y(t_0)\), the method evaluates \(y\) successively with the following recurrence relation: